Study in the United Arab Emirates: A Guide for International Students

The country where modernity meets tradition, the United Arab Emirates (UAE) is a popular tourist destination and is home to some of the best universities in the Gulf region. 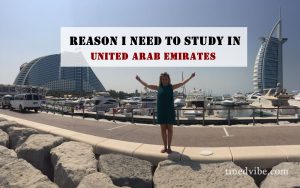 The UAE is the perfect destination for any international student looking for a truly unique study experience.

Why Study in the UAE?

Since the discovery of oil in the region in the 1950s, the UAE’s economy has been rapidly changing. Now the country is known for not only oil and gas exportation but is also improving its recognition in the tourist and construction industries. Located in the cities of the UAE you will find some of the world’s most impressive architectural feats, including the Burj Khalifa.

The higher education system is governed by the Ministry of Higher Education, which is responsible for the admission of students, as well as accrediting degree programs. You will find 3 of the UAE’s universities in the 2019 QS World University Rankings top 500. The highest-ranked is the Khalifa University, which is placed at 315th.

Located in the Middle East, the UAE is divided into seven emirates, all governed by separate rulers. Together, the seven rulers form the Federal Supreme Council. The population of the UAE is made up mostly of expatriates, due to the tourist influx. Sharing land borders with Oman and Saudi Arabia, the UAE has a hot and arid desert climate, with very hot summers.

There is evidence of human occupation in the UAE dating back to 125,000 BCE, with burial sites from the Neolithic Age and Bronze Age. The modern cities blend a rich cultural tradition with the contemporary way of life. There are many world-famous attractions located in the country, including the seven-star hotel the Burj Al Arab, the Wild Wadi water park, and the indoor ski center, Ski Dubai.

The country and its policies are influenced by the main religion; Islam. The way of life that many citizens abide by may be a world away from anything you have ever experienced, but is a great lesson in tolerance. There are strict rules defining dress codes and alcohol consumption, something that the authorities take very seriously. If you do choose to  Study in the United Arab Emirates (UAE), it is important that you are aware of and adhere to social expectations. Some cities are slightly more relaxed than others, for example, Dubai is not as strict as Abu Dhabi.

Study in the United Arab Emirates

The UAE is known for being safe, with very low rates of violent crime of any sort. Crimes are treated seriously, and punished accordingly, especially crimes against women. As long as you respect the country’s Islamic culture and customs, you are unlikely to have any trouble.

Cost of Studying and Living in UAE

The UAE uses the UAE Dirham (AED) as its currency.

Institutions in the UAE are permitted to set their own tuition fees, so costs will vary depending on where you choose to study. Tuition fees will also vary depending on the level and type of degree you choose. On average, you can expect to pay around AED 48,000 for a master’s degree, and up to AED 120,000 for some specialized graduate degrees. Courses are charged in semester credit hours as opposed to months or years. You may be eligible for a scholarship to help with your tuition fees, check with your institution to find out more.

Students looking to study in the UAE need to consider their living costs. For a private rented apartment, you can expect to pay around AED 3,700 per month, with utilities costing around AED 440 per month. If you choose to live in a bigger city, you should expect higher living costs than smaller cities and towns. If you live outside of the cities, you might need to think about getting a car, as transport is not the most efficient.

All students who are looking to study in the UAE will need to apply for a student visa. To obtain a visa you will usually need to be sponsored by a resident of the country. Most institutions offer this service, but you should be sure to check before you start your application process. The application is done online, but you should be aware that sponsorship does not guarantee your visa. Application costs can be up to AED 3,000 and the deposit up to AED 3,000.

You will need to provide certain documents when applying for your visa. These are:

Student residence visas will only last for one year, and will therefore need renewing if your course is longer than this. When you apply to renew your student visa, you will need to pay more visa fees.

The official language of the UAE is Arabic. So if you are from another county then you’ll need to learn how to speak Arabic before you can interact with people over there.
The majority of the population speak fluent English, so communicating should not be a problem. If you choose one of the UAE’s public universities, you will need to be fluent in Arabic and English, but private institutions tend to teach in English. Whether you choose to study in English or Arabic, you will need to provide evidence of your proficiency if it is not your native language. Even if you study in English, learning some Arabic would be useful for your everyday life. Communicating with the locals and other students would be a perfect way to practice. An extra language would look great on your CV/resume, and Arabic is widely spoken as a business language.

The capital city of the UAE, Abu Dhabi is home to over 1.8 million people. The city is host to the United Arab Emirates Government, as well as the President of the UAE. The rapid development of the city, as well as the high average income of the population, has turned the city into a large and advanced metropolis. The city is the country’s political, industrial, cultural, and commercial center.

Located in the city are several universities, as well as international university campuses. One of the institutions in Abu Dhabi University, which is the largest private university in the UAE. It offers undergraduate and postgraduate degrees and has three campuses in the country.

The largest and most populous city in the UAE, Dubai is home to over 3.1 million people. Dubai is a global city and is the business hub of the country. You will find the world’s tallest building in the city, the Burj Khalifa. Dubai has a high tourist influx and is relatively forward-thinking. There are many cultural events held in the city.

There are many higher education institutions located in Dubai, a mixture of public and private. Some of the institutions are home campuses, but there are also several international campuses. One of these institutions is Al Ghurair University, which is a private university founded in 1999. The institution offers undergraduate and postgraduate degrees in a wide variety of areas.

Apply for the DOH Scholarships for Medical Students in Philippines