If Lionel Messi Don’t Need Philippe Coutinho at Barcelona this January then what next for Barca?

Recently, Lionel Messi has reportedly offered an unintentional helping-hand in Liverpool’s efforts to keep Philippe Coutinho at the club this January. 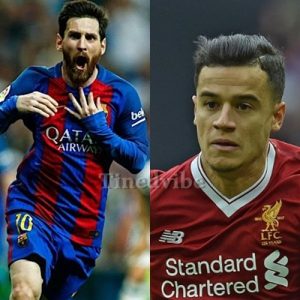 Speculation linking the Brazilian (Philippe Coutinho) to Barcelona has mounted heavily in recent weeks, with the Catalan giants expected to reignite their interest when the transfer window re-opens next month.

The La Liga club seemingly have no intention of abandoning their pursuit after seeing three bids for the No.10 rejected by the Reds in the summer.

Can Liverpool keep Philippe Coutinho this January or Next Session?

In keeping with an unusual theme that has emerged, Messi has told Barcelona to divert their attention away from Coutinho and instead try to sign Real Sociedad starlet Mikel Oryazabal, according to Spanish outlet Diario Gol.

However, It’s safe to assume there’s little truth in such suggestions, with Messi having also previously been reported to have encouraged Coutinho to move to the Nou Camp.

Having fought hard to stand by their stance and hold on to Coutinho during the summer, the onus is on owners Fenway Sports Group to resist any offers to come in following the turn of the year.

Jurgen Klopp deserves the opportunity to work with an uninterrupted squad in a campaign where Liverpool are not only striving to make an impact in Champions League but also fighting in a tight-contest to secure a place in Europe next season.

A lot of Liverpool fans are sick of hearing about Coutinho saga that he may leave on January or next season.

It appaers that Lambert believes the club have every good reason to maintain that stance when Barcelona come calling after the turn of the year.
the former Liverpool striker told BBC Radio Five Live Sport that Liverpool should have granted the Coutinho his wish to join the Nou Camp but i think there will be no room for that.

Klopp also give update on Coutinho leaving Liverpool Football Club said; there is no change in Philippe Coutinho situation at Liverpool amid the speculation hinting at a January move Barcelona football club.

“There is nothing to say in this moment. Nobody came to me so far to say Coutinho will be away heading to Barcelona in January. He also added; I am fine with the situation. We had this same situation in the summer, so i have no desire to thinking of it or have it again”.

More update on LFC transfer will be publish here. YNWA