Some news coming from the french outlets Canal plus and RMC sport both reported that Liverpool were set to pay some amount of £62 million for the Lyon attacking midfielder. 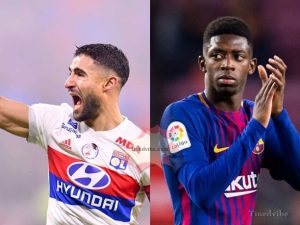 Yesterday Klopp was surprised when asked about the interest in both Fekir and Ousmane Dembele from Barcelona after defeated 1-0 to Chlesea.
Jurgen Klopp said “I don’t never comment on any rumours.” If it happen is pretty cool but i never still comment.
The asurane of Fekir joining Mane, Mohamed Salah and Roberto Firmino in a fluid attacking unit at Anfield will be a deadly and attractive said klopp on SFR Sport at Stamford Bridge.
However, Nabil is a great player with a good attitude, If that’s the case, the Fans, we will be happy to have him in our sqaude.

So “I believe he would do a great thing with us. The club always need this kind of players, If we have him in our team it’ll be fire”
Therefore, If Fekir join Liverpool then the starting lineup may also include Mane, Salah, Firmino and the incoming Naby Keita may demand a tactical shift from Klopp with the best No 10 Lyon captain.
Yes Fekir can as well operate in the most advanced role that will help Liverpool’s three-man midfield, with the coming of Keita fielded alongside him and a deep-lying midfielder across them.
Fekir’s creativity an his comfort in possession will help to feed the likes of Liverpool three wise man Mane, Firmino and Salah.
Let see if it happen, it will be a great news to sign him at £62 million which will become the Red’s second most expensive signing in the history behind only Virgil van Dijk.

Jurgen Klopp was asked in his post-game press conference after losing 1 – 0 against Chelsea about the interest in Ousmane Dembele.
Klopp laugh, when talking about Ousmane Dembele, he said “but no comment. What was the second player name? Oh, is he Dembele on the market again? Yes now am interested!
Let watch and see if this will work.

So if you have any contribution or any player you want Liverpool to buy then you are free to leave your comment here. You’ll Never Walk Alone!